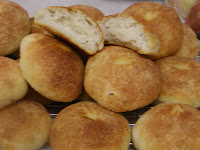 So what do you do when a planned meeting turns into dinner?  Bake bread from my favorite bread-baking book, of course! 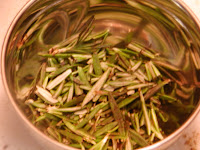 While I've really been going out of order on the recipes lately, the fun has been the fact that I'll find a craving for a certain type of bread and then check to see if Reinhardt covered it.  Inevitably, he has, and I get the fun of going through it and learning it.

So far, I think this is the first recipe I've tried that requires a biga pre-ferment.  You may remember me mentioning a different sort of pre-ferment called a poolish which generally takes on the consistency of pancake batter.  A biga on the other hand forms a firm dough that you cut up and add to your main ingredients.

Pulling the dough together was pretty easy.  I have an ongoing love affair with my Kitchen Aid mixer that would surely make my partners jealous.  Bread-making is so easy with it.  I remember hearing tales of how much work it was to make bread, and as I work my way through Reinhardt's book, I continue to shake my head at this notion.  Being that I flirt with carpel-tunnel syndrome in both wrists, kneading by hand is not the preferable way to go for me, but I've done it as needed (hee!).  But putting on the dough-hook and letting the mixer pound on the dough for a while makes it so much more pleasurable.  :-)

The only thing I noticed, and this in hindsight was probably related to moisture content of the mashed potatoes, is that it took a good deal more flour during the kneading stage to get a smooth and not sticky dough.  Once it came together, the kneading was easier and it came to pass the window-pane test. 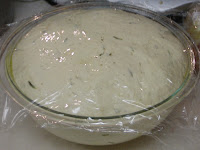 First rise was quick and good.  At that point, I carefully separated the dough out into 2oz balls with the intent of making dinner rolls instead of a loaf.   I formed the mini-boules quickly and with as little compression as I could, though I noticed the dough was really susceptible to deflating and I think this affected things later.

I let them proof for about another hour or two until they perked up.  I then spritzed them with water, and pressed in a rosemary leaf cluster to try and decorate the rolls.

Then in the oven for 10 minutes, rotated 180, and another 10.  This resulted in a nice brown crust.  Unfortunately, I needed to have buried my rosemary decoration a little deeper in the dough.  Almost without fail every single decoration desiccated in the oven to the point where not only did they fall off the roll, but they crumbled into powder when I picked them up.  And people wonder why Christmas Trees are so flammable. :-)

The results were a nice crumb and a firm and chewy crust.  Good flavor in spite of forgetting to add the garlic.  I will remember next time.

My only complaint was that the rolls ended up a little flatter than I had wanted.   When they proofed, they didn't really rise up so much as poof out.  I'm guessing this is due to poor gluten production and I guess I'll have to either try different flour, or knead for even longer.  Not sure, but it's a work in progress.

Didn't seem to deter our hosts from devouring them though. :-)
Posted by Marcos Duran at 5:37 PM