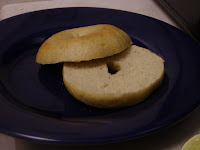 I finally got around to getting into the bagel recipe!

The hardest ingredient to find, of course, is the barley malt syrup.  None of the regular grocery stores have it, but I found a jar at our local PCC.

Putting the dough together was really easy.  The sponge was a snap, and the rest came together pretty quickly.  I did part of the kneading in machine, and part by hand when the machine started chugging as the dough got thicker.  Window pane test passed, I formed my roll form, and let them rest. 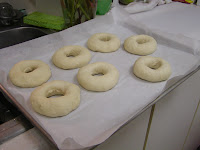 The forming of the ring felt really natural.  I used method one in the book, which is basically piercing it with your thumbs and using them to create the hole.  Worked really well.  Float test worked on the first try, and in the fridge they went.

Next morning, I got my water boiling and my oven pre-heated, and got to making them.  I went for the 60 second per side boil, and I got a lightly chewy bagel. 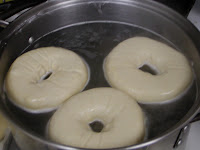 Flavor was good.  I imagine these are more authentic than store-bought.  The barley malt syrup gave them a flavor that was unusual to me.  Not bad, per se, just unusual and unexpected. 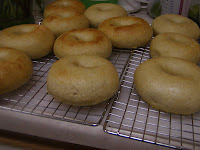 I left them plain this time, and may experiment with toppings, though I really think I want to make raisin or blueberry bagels next. 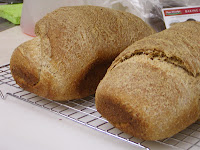 It's interesting how a craving can totally derail your plans in the kitchen.

This BBA Challenge bread is one of those as well for me.

I decided to skip around because I decided I was really craving whole wheat bread, and I'm looking for something to replace buying sandwich bread.

I did a few things differently, but in hindsight, more realistically from the persepctive of someone that would make bread regularly on a small scale.

I made a batch of Greek Celebration bread to go with Easter brunch this year, and accordingly, I had a little bit of poolish leftover.  Having decided I'd find a use for it, I let it sit a day in the fridge until I found a recipe I wanted to try that used a poolish.  That's when I decided to go with the whole wheat loaves.  So I thought I'd try refreshing my poolish in much the same way as you would a barm: equal parts by weight flour and water, and in this case, I converted it to mostly whole wheat with the refresh.
Having let that ferment a little at room temperature, I fridged it and got my soaker together.  For that, I used 8-Grain cereal from the bulk bins at the store.  It amounts to coarse grain cereal that fits the bill perfectly.  What surprised me was that overnight, the liquid was entirely absorbed.  Having worked with the Anadama bread, my soaker for that was still rather mushy, so I was kinda surprised at first that I ended up with a big sticky lump.
The recipe for the bread doesn't really add any additional liquid to the dough (I did use the honey and egg), and that surprised me as well, but mixing it turned out perfectly.

I added about another 3/4 cup of flour through the kneading process to keep the dough from being too sticky.  When it was done, it was tacky feeling (just a little bit sticky), but passing the window pane test, so I was happy.

The initial rise went without hitch in the allotted 2 hours.  Shaping wasn't too bad, though as usual, I didn't quite get the cut even between the two loaves, so one was slightly larger than the other.

My only regret was that I didn't give them enough proofing time.  They rose, but I am willing to bet I could have gotten a little more out of them if I had had time.

Flavor is really good.  There is still something about homemade bread I haven't figured out.  There is a flavor component that I don't really appreciate, and I haven't really taken time to think about how it is and what it really tastes like, but I know that any time I've attempted homemade bread, I taste this flavor that I don't like.  Something to keep plugging away at.

But yeah.  Sliced and toasted this morning, it is very good, and when I get more supplies and time, I'm looking forward to trying the proof again.
Posted by Marcos Duran at 8:40 PM No comments:

So I've been in the frame of mind to try new and interesting things lately, and one of the things I decided I wanted to do was find a recipe something similar to Charlie's Blackened Chicken Fettuccine.

What I found isn't quite the same, but turned out tasty nevertheless.

And this arrangement serves 4 conservative portions.  The sauce may run dry, so you might bolster it a little if you like your servings more saucy. :-)

First, I brought water to a boil and began to cook a pound of whole-wheat penne pasta.

Then I pounded out two chicken breasts flat (I like putting them between two sheets of plastic wrap, and giving them a good wallop with the bottom of my marble mortar.  No fuss, no muss.

After that, I liberally coated one side of the breast in Emeril's Essence (though any good blend of good rubs and seasonings would work as long as they will toast well).  Pop it in the hot cast iron pan with a 1/2 tblsp pat of butter, and let it cook for a good 3-4 minutes until the surface chars.  Coat the other side, top with another pat of butter, and flip.

For the sauce, I sautéed a cup of green pepper (recipe called for red, which I think would have tasted better, but I forgot to grab it), a cup of scallions (green onions), and a cup of mushrooms, all 3 diced up, in about two tablespoons of olive oil.

Once they softened up a bit, I added in a whole pint of heavy cream, 2 tablespoons of butter, and let it come up to just the other side of a simmer.  Then I added a good fist full of Parmesan, and stirred to incorporate.  Salt and pepper to taste.

Plate some pasta, sauce over the pasta,  chicken breast sliced, and then placed on top of the pasta with a little drizzled of sauce over top.

Portion-wise, we found that with good sized breasts, as is often the case ;-), one split between us was good to go with about a quarter of the pound of pasta, give or take.

While this wasn't faithful to what Charlie's makes, it was very good on its own.  I hope to tweak this to make it something more like the recipe I love, but I would definitely make this again, and may even see about mixing things up between the two for the sauce when the time comes.
Posted by Marcos Duran at 12:26 PM No comments: