One of the things I enjoy about getting a CSA box is that they often throw in things I wouldn't otherwise think to buy for myself.  This week, we got an Eggplant!  I can't say I've ever really learned to appreciate eggplant.  My mother seemed to enjoy them, but I don't recall her making it very often.  I know she had a love of Eggplant Manicotti, and I think she made that once that I recall.  I don't remember being all that impressed, but it was a long time ago.  I don't recall having tried it on my own since.

But with a beautifully purple fruit in my possession, I couldn't help but see what I could do.  I wasn't really thinking Manicotti, but Eggplant Parmigiana sounded like a good choice.

I dug through various recipes, and they mostly said the same things.  Bread the eggplant, fry it, layer it between homemade tomato sauce, slices of mozzarella, and basil leaves  up in 2-3 layers in a baking dish, and bake until it is melty and toasty.

I started with a 28 oz can of peeled whole tomatoes which I emptied into a sauce pan on medium heat.  To that, I added half an onion (cut in half.. so two quarters) left intact, 5 tablespoons of butter, a shake or two of salt, one clove of garlic, minced, and about half a cup of red wine.

I left that to simmer down, occasionally smashing the tomato pulp against the pan with a spoon.

I sliced the eggplant into 1/4-1/2 inch slices and dipped them in flour, then egg, then seasoned bread-crumbs.  Then in about 1/2 inch of olive oil, I fried them until golden.

Back to the sauce, once it had cooked down, and the onion was translucent, I removed the onion, and used a potato masher to break down the remaining pulp.  I suppose I could have broke out the immersion blender, but I wanted to have it a little chunky.  I let it simmer a while longer until it thickened.

Once the sauce was ready, I broke out the small baking dish (if you use 2-3 eggplants, go for the 13x9 dish), and starting with the sauce, I layered it with the eggplant, slices of mozzarella, fresh basil leaves, and parmigiana reggianno, and managed 3 layers with about 12 slices from the one eggplant.  Sauce on top, more parm, and into the oven for about 20-25 minutes at 350 until it starts to brown and is all melty.

Not only is it vegetarian, but with this preparation, even a meat lover like me won't miss it.  I'm going to have to start hunting down my own eggplant now. :-)
Posted by Marcos Duran at 6:50 PM 1 comment:

An Apple Muffin A Day... 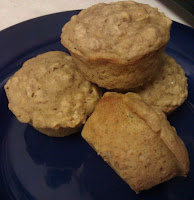 I like to follow several food blogs and one I enjoy is Macheesmo, a cooking blog from a guy by the name of Nick who encourages cooking in instead of eating out, and learning the basics and building on them to build confidence and do interesting and creative things in the kitchen.

Recently, he posted a recipe for Triple Apple Muffins, and I decided I just couldn't pass them up.  You can find it here! - > http://www.macheesmo.com/2011/05/triple-apple-muffins/

I knew we had apples coming in the CSA box, so I snagged one for use in the recipe.  I think that was the only thing I would change because the Braeburn I used was not the best for baking.  They seem better suited for just eating, which is fine for now.  Next time I'll come up with something better.

Nevertheless, I used it anyway, and they still turned out really good.  The apple flavor was off the charts, and the apple sauce specifically made the muffins moist and tender.  The recipe got great reviews from all those who tested them. :-)

And the most difficult part?  Peeling, coring, and chopping the one apple.  The rest was a snap!

I made it myself! How hard could it be?

I was sitting at work during a potluck listening to the jabber, and somebody joked that they made their lasagna from scratch.  Made the cheese, the pasta, the sauce, etc.  It was a joke, and everybody laughed, but I thought to myself... how tough would it be?

I mean realistically, it certainly would be more effort than assembling one from pre-made ingredients, but it is not as if those ingredients are really that difficult to pull together, particularly if you are already making them in bulk for other things.

Mozzarella is one of the easiest cheeses to make, and ricotta can be made from the leftover whey from the Mozzarella.  The pasta noodles are extremely easy to make, and a good tomato sauce is also relatively a snap.  Make a little Italian sausage from some grass-fed meat, and you'd have what would be an amazing meal.

One of these days, when I get stuff together to make some cheese (had the pleasure of taking an in-home class on some basics but hadn't tried it out myself), I will have to plan ahead to pull the rest together.  And if I'm going to do it, I will do it in bulk so that I can freeze it all and have it set to go for dinners during the week.

A Bundt In The Oven 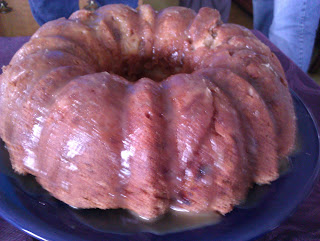 A holiday favorite 'round my family when I was growing up was my Mom's Fresh Apple Cake.  A very simple bundt cake that was reasonably light, tasty, and well received.

I've in past generally reserved it for Fall and Winter holidays, but with Easter brunch approaching, I decided I had a craving.

While searching for comparable recipes, I noticed that it is a very popular and common dessert and there are lots of permutations (even with different fruit!) that allow for interesting options and flavors.

This recipe includes a glaze that my Mom didn't often include, but I've found that it adds an extra but subtle sweetness that compliments the otherwise mild flavored cake.

Grease/butter the bundt pan thoroughly (use a brush if necessary) and flour.  I like to sprinkle in a little bit of extra cinnamon in with the flour to give the cake a nice crust.

Mix sugar into the oil.  Beat the eggs and mix into oil/sugar mixture.  In a separate bowl, combine the flour, salt, soda, and spices.   Add the dry to the wet.  Fold in the pecans.  Fold in the apples.   Pour into pan and level it out.  Bake for 70 minutes (give or take.  Test with a toothpick at 70 minutes)

Allow to completely cool before trying to release from the pan.

Heat in a double boiler (or an equivalent) until thick.

Drizzle over the top of a cool cake.

Enjoy.
Posted by Marcos Duran at 7:55 PM No comments: