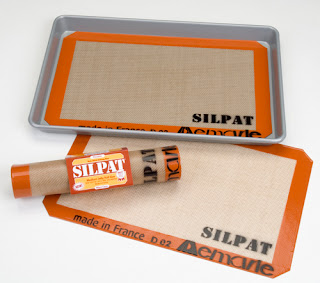 Though my holiday baking this year left a little to be desired both in quality and quantity, one of the best parts of it was using my Silpats.  I have been drooling over these for years and finally decided they were worth the expense.

Silpats are silicone covered woven fiberglass fabric that are able to transmit heat, but also create a non-stick surface similar to coated baking parchment paper.  Almost nothing sticks, and cleaning them is a breeze.

One of my failures this year was my Palmiers, which just didn't taste the way I like them.  It is something I will continue to work through this year, and see if I can figure out where I went wrong.  But baking them presented the same problem it always does.  The sugars melt out of the cookies, and caramelize on the pans.  Left on unlined pans, it is extremely difficult to remove, and Mom's sheets were always thickly coated as a result, which ultimately destroys the sheet pans.

I've used parchment paper in the past, and it works well enough, but I really dislike the idea of using disposable things when I can help it.  Silpats resolve that problem.  They sell different sizes for different pans.  And you just lay them in the bottom, and bake as usual.  The only caveats for using them is that you can't cut on them or do anything to damage the silicone because it will release the glass fibers into your baked goods.  But they rinse off pretty easily, and even the sticky caramel from my Palmiers popped right off.

I'd highly recommend them and say they are totally worth the investment.  They don't seem to affect baking in any way, and I don't feel like I'm having to continually buy products to get the performance I want.  If you've been on the fence, go for it.  If you don't know about them, hit up your kitchen store and check them out!
Posted by Marcos Duran at 12:08 AM No comments:

When your family decides that the favorite Christmas treat you should make is fresh ginger molasses cookies, you keep hunting for better and better cookie recipes.  And so it was with me this year.

I stumbled on this recipe, http://www.thekitchn.com/thekitchn/recipe/recipe-drunken-molasses-cookies-with-ginger-160363 which adds a little rum to the usual mix.  I made the recipe as listed, and decided that both the dough was too wet, and the cookies just lacked something...

The cookies can be scooped, but they are gloppy and won't really form balls.  I like my dough a little stiffer not just for forming, but because I like to roll them in a little turbinado sugar just for fun.  If you aren't rolling them in sugar, you can chill the dough for a while and it will firm up enough to portion.

Looking at past recipes of other attempts, and just comparing spices and such, I realized I needed to add something, and also, I decided to thicken up the dough a little bit with extra flour.

I added 3/4 tsp of Cinnamon, which as the only spice addition really improved how the rest of the flavors came together.  I also added almost an additional cup of flour.  I added it in increments as I stirred, and I would say to do the same until you get the consistency that feels right.

Once I got the dough where I wanted it, I used a cookie scoop to measure out balls, and rolled them in turbinado before hitting the cookie sheet.

When they baked, the melted turbinado created this wonderful crisp crust, and the cookie inside was moist and tender.   I don't know that the rum added so much, but I used Bicardi Gold.  I might try some Captain Morgan's just to see what benefit a spiced rum would give.  Overall, I think it was a successful batch, and the family seemed to enjoy them quite a bit.

I still may play with it a little, but I think I have a good place to start.
Posted by Marcos Duran at 12:43 PM No comments: