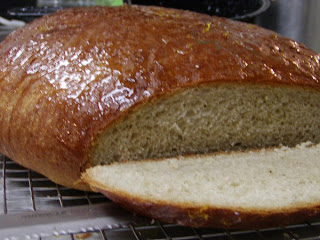 Artos has its roots as a part of a Greek East Orthodox ritual involving the blessing of said bread as a symbol of the physical presence of the risen Christ during Bright Week, or the week long celebration including and following Easter.   It is held intact and often venerated throughout the week, and then divided and consumed on the Saturday at the end of Bright Week.

The book has several recipes for a few different versions including a basic bread, and versions with dried fruit and walnuts.

The one I recall having when I was in grade school was served around Easter, and the dough is braided around 3 hard boiled eggs that are dyed bright red.  After it bakes, when you pull the bread apart, you see that the dye leaches into the dough and turns the bread bright red in those areas. 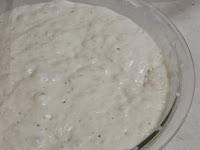 This dough calls for a pre-ferment, and one that can take several days depending on which you decide to use.  A barm is what most think of as a traditional sour dough starter.  That can take several weeks to get going in order to get the wild yeast and bacteria going.  You can also use whats called a poolish ferment, which in this context is a shorter ferment created with just baker's yeast, flour, and water left to ferment for 4-5 hours at room temperature, and then fridged.  It generally has the texture of thick pancake batter.

I opted for the basic version of the bread, and a poolish ferment for a starter since I didn't have any barm on hand.  My intent, once my barm is made and lively is to remake this bread again.

Relatively easy to put together.  A poolish is best with at least one night in the fridge, so I planned time to do that.

The rest of the ingredients came together rather easily using the KitchenAid.  By hand, I read that it can take a bit to mix the poolish through, but the mixer's paddle had no trouble.

Kneading was interesting.  The dough needed at least half a cup more flour, and I probably could have gotten the dough more stable with even more flour kneaded in.  In the end, it was a little sticky yet, but I opted to go with it anyways.  I believe it helped create problems when I had to shape the dough later, but more on that in a bit.

Rising was beautiful.  The poolish worked really well.  It was easily doubled in the hour allotted for the rise. 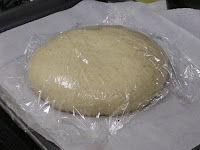 When I pulled it out to shape it for proofing, that was when I experienced problems.  The dough rolled out of the bowl still rather soft and sticky, and I had difficulty getting a good tight skin on the shaping. 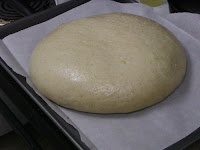 Proofing was also very productive, though as a result of my prior difficulties, I didn't get as much height as I had hoped and the dough spread out more than it spread up.    The hope was for a bit more height, but I was left to hope for oven spring.

Baking was quick.  I've taken to using temp guides to know when my bread is ready and it seems to be working really well.  I flipped at the 20 minute mark and then checked temp about 15 mins later and it was ready to go.

I mixed up the recommended glaze, but I suspect I overdid it.  Or something didn't quite work in how I assembled the glaze because it dried really sticky.  The bread turned out really wonderful, but it's fun to hold and cut without getting glaze all over my hands.

It has a very spicy but not exceptionally sweet flavor with the cinnamon, cloves, allspice and nutmeg in the dough.  The glaze adds a nice but limited sweetness.

Overall, this is the first bread I've ever baked with a nice soft crumb and crust.  I'm very pleased with the leavening and the gluten and really am happy with my progress.