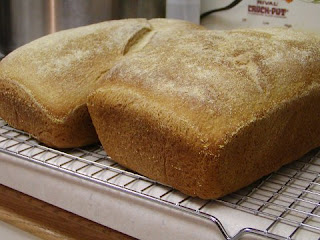 Anadama bread is a New England bread made with corn meal and molasses for flavoring.  There are several myths as to its origin and name, most related to a tale of a fisherman who, after tiring of a corn meal porridge with molasses served daily by his wife Anna, added flour and yeast to create the resulting bread, then cursing his wife.  "Anna, damn her!"

The preparation begins with an overnight soak for the corn meal.  Many other recipes I've looked at call for the corn meal to be cooked prior to preparation, but as with what goes along with the theme of this book, taking your time to allow the ingredients to do their thing builds flavor that all techniques to rush it miss out on. 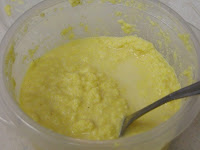 I prepped my soaker in a small plastic container with a lid and left it on the counter for the night.

Bringing it together with the initial fermentation ingredients, I left them to liven up per the formula for an hour.

Returning to a frothy mixture, as expected, I added the remaining ingredients and prepped the dough.

The recipe mentions that the molasses offers a lot of flavoring to the bread and that depending on your preference for the darkness and harshness of molasses, it is sometimes best to find a particularly light version.  I used the standard kind found in the jar at the store.  Nothing special or any particular brand.

The formula states that the dough should come together as a firm but not particularly sticky, and it suggests sprinkling with flour as you knead to tighten it up.  It took over half a cup of flour to do that for me.  Reading other attempts, this seems to jive with other people's experiences.

Once it was together and sporting an almost golden orange color, I left it to ferment another hour and double in size.

I really need to find an easier way to separate out dough.  The formula says that the dough can be separated in 2 equal portions for larger loafs, or 3 parts for the smaller loaf pans.  I have the larger ones, so I cut it into two portions.

This formula does not have a second kneading or degassing.  You just form the loaves and drop them in the pans and let them proof.  I did so, but my loaves always come out uneven so I'll have to work on that part.

About 2 hours proofing (until they crest the top of the pan), and then into the oven for about 40 minutes, turned halfway through.  Pull when they are nice and brown.  Rest an hour at least once they are out 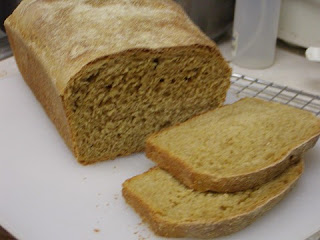 It was a relatively easy recipe and aside from my problem dividing the dough, the flavor and the crumb are wonderful!

The molasses does impart a strong flavor, and I can understand the suggestions of using a light molasses versus a stronger one.  I may try it with lighter molasses in the future.

I'm tempted to use a smaller loaf pan just to get a little more height out of the loaf.  The other thing I might do is double the recipe and split the dough 3 ways into 3 pans like the ones I already have and see if that works better.  I could let the loaves proof longer, but I already noticed small air pockets forming.  Proofing any longer, and I'd have caverns and the bread would fall in the middle.