Memories of tortillas and cooking 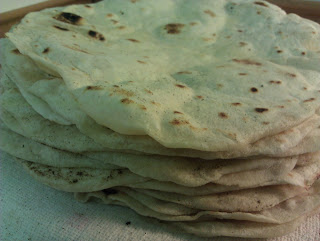 One of the things I had the fortune of growing up with is fresh flour tortillas.  Any time we had a meal where they were needed, Mom would whip up a fresh batch.  Occasionally, I'd even get to help out with the cooking of them.

Tortillas had an interesting set of traditions in my family on my Mom's side.  In Latino families, it isn't unusual for them to be made at home fresh, but sometimes, if you worked in the local tortilla factories as some of my Mom's family did, they'd bring home "fresh from the factory".  Another interesting aspect was for how they got cooked at home.  The traditional way to make them involves cooking on a round cast-iron griddle called a Comal.  Nowadays when you search for "Comal" you end up finding all the typical round griddles that people buy for all sorts of things.  Back then, however, with wood stoves not being quite as antique, it wasn't uncommon for the cast-iron stove covers to be repurposed to be used as a comal on a more modern stove.  We have one in my family that my Mom still keeps and uses from time to time.

As with most home-grown recipes, while it is all well and good to attempt to write them down, it is inevitable that there are things that don't get quantified.  It is difficult when you've made something your whole life without a recipe to suddenly remember and get it all down accurately so that someone who's never made it before can do it.  That was me when trying to reproduce my Mom's tortilla recipe.  She had it down for me, but no matter how many times I tried it, the dough never came out quite right.  Ultimately I know that there is some little piece of love that I'm missing to make it come together.  That or a little extra flour or water or something. ;-)

Recently, I stumbled on a recipe I really like.  While hopping around YouTube, I found a video of a woman that makes them, and she has an instructional video as well.


The dough is really supple, and as you work it, all the sticky dough from your fingers incorporates in until you're left with a really nice ball.

The 45 degree rotating method while rolling is a really nice trick to get them round.  I always rotated 90 degrees which is a great trick to get them to look weird and lumpy.   :-)   I also use vegetable oil instead of shortning (I will have to try them sometime with lard just to know how much better they can be), and they still turn out pretty good.

One last thing I do, out of laziness more than anything else is I just divide my dough by halves to get the count I want.  I start with the big ball and divide it in half.  Then each half into half.. and onwards until I get what I need.  If I want large wrap-style tortillas, I divide it down to eight balls (though on my comal, they roll out almost too big.  I'm considering trying to divide the big ball into thirds and then working my way in halves down).  If I want more modest rounds, I divide down to 16 balls.

One of the other things not mentioned in the video, but having manned the comal for many years you learn is that it is a roll and flip sort of thing.  You place down your most recent rolled tortilla and then start rolling out the next one.  Periodically you move to flip the one on the comal while you finish rolling out the next one.  Then as the fresh tortilla is ready to remove from the comal, you are ready to place the next one down.  And so on and so on until you're finished.    It is good to keep the hot ones wrapped in a cloth on a plate or in your serving basket.  Just remember to allow for ventilation wherever you keep them because if you don't allow for the steam to escape, they'll get soggie.

I'm sure some people think it is easier to hit up the local mega-mart and grab a pack of pre-mades.  But as easy and fast as these are to make, and as delicious as they turn out, why would you?
Posted by Marcos Duran at 9:17 AM