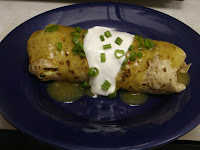 Back home in New Mexico, breakfast burritos are a dime a dozen.  They are good, filling, spicy, and tasty. That may be why I don't make them as often for myself.  I used to eat them all the time.

But after having sampled some recently from a local guy whom is almost famous for them, I couldn't resist whipping up a batch of my own.

Really, breakfast burritos can contain anything and everything.  They are great for cleaning out the fridge of veggies, meats, and sauces.

I opted for the basics.  Eggs, potato, veggies, and meats.  I cheated a little on a few things, but first thing in the morning, you don't always want to spend time prepping.

I had whole wheat tortilla wraps that I heated up.

I tossed about two tablespoons of olive oil into a hot cast iron skillet and tossed in a small handful of frozen tater tots.  Any kind of potato would do, and you can even season up and fry some diced potato if you like, but since they take a while to cook, I like to use frozen options.  Once those soften up and break up a little, I add diced green pepper, diced onion, and a heaping teaspoon of canned diced green chiles (fresh are better, but those are hard to find out this way.)  I kept stirring them until they just started to soften.  I then added the meats (in this case shredded ham and turkey cold-cuts) and let them brown a bit.

Meanwhile, I beat 3 large eggs, and when the meat and veg are ready, I pour it into the skillet together and stir it around.  I shake a bit of Johnny's over it and then keep it turning and cooking.

Once it's nearly done, I like to toss on some shredded cheese to taste.  I like a lot, but you can put it as much or as little as you like.

Once its ready, I spoon it all onto a heated wrap and toss in a spoonful or two of black beans.  Then I tuck the ends, and roll it up.

For me, I wanted them to be even more zingy, so I opened a can of green chile enchillada sauce which I poured over the burrito and then garnished with finely chopped scallions.  I also added a little sour cream to mine, but again, go with what you like.

It's true of any of the ingredients.  You could include diced tomatoes, bacon, cilantro, diced steak or leftover tenderloin, Spanish rice, black olives, other types of beans, corn, or any other interesting combination of things you might enjoy.   Your imagination is the limit, but your inventiveness will be rewarded!
Posted by Marcos Duran at 10:39 PM