Look At My Pinwheel and See What I've Found 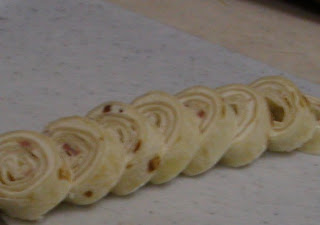 Pinwheels are an appetizer that I make periodically for parties and gatherings.

There is a story behind them.

I remember being at a convention where they served these mini wraps that were cream cheese and thin slices of ham rolled up.  I enjoyed them, but I felt I could pump them up a notch.

The first iteration ended up being bacon and cream cheese, and fresh roasted green chile.  The added flavor and heat of the chile did wonderful things, but it still needed something else...

Deciding to experiment, my partner at the time tossed in a little garlic powder, and that ended up being the factor that pushed them over the edge!

These days living 1600 miles from my chile source, and lacking freezer space, I tend to make them without, but that also makes them really easy.

I pick up two blocks of cream cheese and a pack of burrito sized flour tortillas.  I soften the cream cheese in the microwave for about 30 seconds.  Soft enough to mix and spread, but not too soft.  To that I add about a teaspoon of garlic powder.  Then I mix in about 3 slices of bacon crisped up and chopped fine.

Once that all comes together, I lay out a tortilla on the cutting board, and I slice off a little bit squaring off the side edges.  I do that to minimize the waste later.  When you roll them up, the edges end up loose and really not worth presentation, and if you square up the tortilla ahead of time, those end pieces aren't as big.  With the edge pieces, I save them and throw them in with soups and such.

Once I spread an even layer on the entire  surface of the tortilla, I roll it up fairly tightly and set it aside on a plate.  Then I continue with each tortilla until I've used up all the filling.  At that point, I take all of them and put them in the freezer for about half an hour to let everything firm up.  It makes it easier to slice them when they are cold.

Then I slice them into half inch rounds give or take, and stack them on the presentation plate in a little circular pyramid.

If its going to be a little bit between when I finish them up and when they are devoured, I stuff them back into the freezer to keep them chilled and together.